Hey guys, this post features information about TicketMaster and a great Discount Code for different concerts and venues worldwide. You have probably heard before of TicketMaster and already know what they do. They sell tickets. That’s for virtually any major concert or venue in North America, parts of Europe and South America, China and Australia.

OK here’s the information for the Discount Code, which will get you deals on major concerts and access to tickets on pre-sale. The up and coming concert for which this Code will be effective is for the Bon Jovi Circle Tour. Get the Discount Code Below. If there are any problems just let us know.

Also, recently added here are some great deals for Las Vegas ticket shows. There are loads of opportunities for every taste. You can get up to 40% off ticket shows. 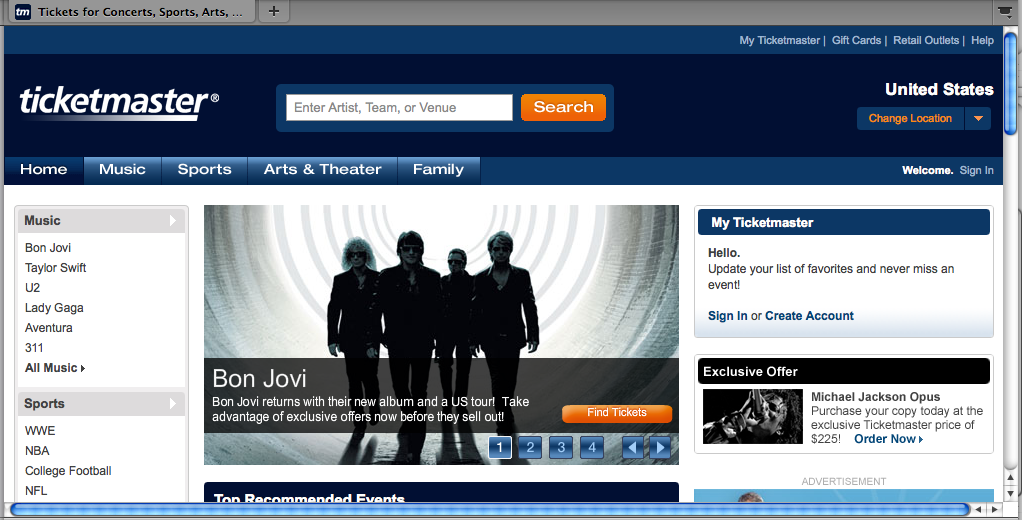 Checking out their site, it’s pretty impressive to see what Ticketmaster can help you get your hands on. Going from Lady Gaga, Bon Jovi, to NFL tickets, to Cirque du Soleil all the way to Harlem Globetrotters tickets this site has it all. Plus, there’s another cool feature on there. Where you can actually contact other sports fans to exchange tickets with them. As an intense Habs fan, this feature is pretty appealing to me. That way you can travel all through the league to follow your team. You just need to have some tickets to exchange.

Also, for the Canadian surfers, there’s a page specifically for you, at TicketMaster.ca. It’s pretty much the same as the main one but it is created to appeal Canadian users in particular. So, instead of getting tickets for the NFL, you’ll find some for the NHL and the Maple Leafs or any major venue touring Canada. The good thing is that you’re still supposed to be able to use the same Discount Code as before.

The only problem for me with TicketMaster is that it’s mainly only good for major events and venues. Which is not necessarily a big problem. But
if you’re like me and also like smaller concerts and shows, TicketMaster isn’t good for all occasions. For example, you won’t be able to find tickets for a more underground concert. So, the trick for me is to diversify and know that I’ll be able to tickets for virtually any major concert in the areas aforementioned (North America, Europe, South America, China and Australia) when I want to. Which is also a good thing, isn’t it?

On a final note, this entertainment company has been here since 1975 and are implanted throughout the world so you know hey will be able to handle their business. They’ve got special offers for anybody from the VIP section to the bleachers. Also they have a solid reputation for their customer service.